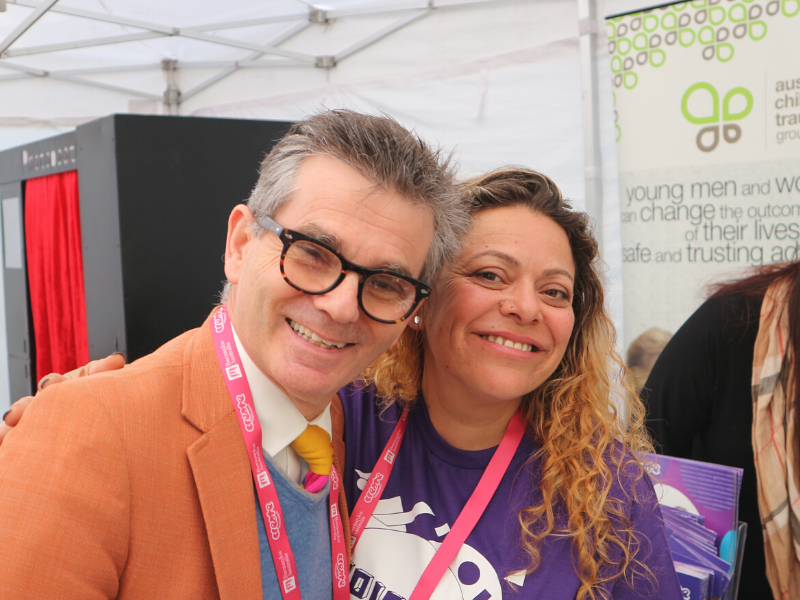 That title probably seems a bit doom and gloom… doesn’t it?

I hope by the end of my presentation at the very least the young people here today might leave feeling inspired. My hope for the adults, you leave feeling the need to be reflective on what part you play in creating the system we have.

I am 60 next year, I was 20 when I started working with vulnerable populations, after I left the army in January 1981 and wasn’t sure what to do next. At 60, I’m told I can get a senior’s card, I’m a bit excited about that, cheaper movies, travel… deadly! But I’m also told 60 gives me the right to be a ‘grumpy old man’. So, because I’m so close to 60 I thought today at this Create spectacular I would be a ‘grumpy old man in training’.

What’s there to be grumpy about?… unfortunately, a lot.

I know categorically that I have personally helped individual children and young people to get to a better place, physically, psychologically and spiritually. I know my staff have and I know many of the organisations who are represented here today have also helped children and young people to be safe, helped them to navigate the complexities of our sector and to discover who they are and where they are heading… all good stuff.

If I finished here everybody would go away, particularly the adults, with their thumbs up saying, “great, job well done… now move along here, nothing to see”. But I can’t. My 89 year old mother when she came to see me speak at a conference a few years ago in Sydney said, “you are so like your father, just have to speak out no matter who you offend”… she paused and then said, “good on you”.

If I offend anybody today, and I can tell you it won’t be the children and young people who are here today that will be offended, I am not apologetic. I have discovered over the years that when people are offended by hearing things that might challenge the ‘status quo’ it’s usually because they are defensive.

If you’re offended, I really don’t give a shit, because that’s the lot of grumpy old men, who say things out loud, offends people and does not give a shit.

Most disturbing of all though is the research that shows what we consign children and young people to as adults. Many of you will have heard of the ‘Adverse Childhood Experience’ survey.

In brief Vincent Felitti and Robert Anda  surveyed 17,000 of their patients. They developed a questionnaire (ACE Survey) with 10 questions that asked people, “what were your childhood experiences of adversity?”

And this is what they found, the likelihood of a person who had six or more factors increased their risk of certain illnesses or disease by:

Every aspect of an adults physical, psychological and spiritual wellbeing is impacted by a child’s adverse experience… no ‘ifs’ or ‘buts.’

The child’s voice – dichotomy of behaviour

When we talk about hearing the voice of children, we fail to listen to how children communicate who do not have a sophisticated voice. For too long we have looked at children and young people as either being good or bad.

I call this split “the Dichotomy of Behaviour” and it is adversely destroying the lives of this most vulnerable group of children.

The more society adheres to tis dichotomy the less likely are we to see a significant improvement in the health and developmental outcomes of children and young people in care and on leaving care.

The voice of children is in their behaviour, when they feel physically, psychologically and spiritually safe, cared for with their fundamental attachment, nurturing and nourishing needs met, then they will voice this through their behaviour; playing, laughing, smiling, engaging, studying, working, growing, reflecting and thriving.

When these fundamental needs are not met then again, the voice of children will be seen in their behaviour; fighting, withdrawing, yelling, stagnating, self-harm, oppositional and just surviving.

For the last few years I have asked CEOs in this sector, peak bodies, government officials, state and federal ministers and national and international Emeritus professors the following question, “Can you categorically say that children leaving the out-of-home care sector today are better off physically, psychologically and spiritually than those leaving the sector 10, 20, 30 or 40 years ago.”

This answer by a State Minister last year sums up the answer by all those mentioned above, “I’d like to be optimistic”. Some of you may not see the problem with this response, no doubt it is good to be optimistic and hopeful, that what we are doing is making a difference.

However, others of you might see the danger and pitifulness of such a response.

I am coming to the end of my tenure in this sector, some will say, “thank god for that.”

However, how can it be after 40 years I don’t know if I am leaving a sector where children and now better off than when I began?

Maunders et al. (1999) noted factors that were found to inhibit transition to independence:

Today we know children and young people are vastly still over-represented in the stats, those who suffer the consequences of successive government policies and institutional tinkering at the edges and community apathy.

So back to, “I like to be optimistic”. Have hope and optimism significantly changed our sector in over 150 years?

Evolution has failed us

In 1867 Florence Nightingale became the mother of nursing during the Crimean War. Although she was hugely passionate about ending the suffering of wounded soldiers, she actually killed more than she saved. Not deliberately so, she just didn’t have the knowledge that nursing, and medicine have today.

The fact is that a child going into hospital with a disease or injury today is better off than in 1867. We can even look at particular diseases or injury and say, “40 years ago this cancer had a 60% mortality rate, today it is 5%” Evolution should show us change for the better over time, but only if you track it.

Can we say this in relation to children and young people in care? Can we say that 40 years ago children in care were, when we look at their developmental milestones, 4 standard deviations away from the norm and today, they are 1?

There is some subterfuge at play here I believe – definition of subterfuge, “deceit used in order to achieve one’s goal.” And what is that goal, “to distract” all of us from the reality that the evolution of Out of Home Care has failed miserably to meet the developmental needs of infants, children and young people.

“Oh, but we have hope and optimism.”

This is akin to our current batch of politicians and ‘naysayers’ reporting that climate change (read global warming) is a hoax at best or some lefty plot to take over the world, ignore the science and attack the messenger.

It’s not hard to track developmental millstones and mental health and wellbeing. It’s not hard to take a particular cohort and compare them to another. It’s not hard to show such statistics in a meaningful way to the whole community, to make them transparent, to clearly demonstrate that the billions of dollars of tax-payers money are being put to good use.

This begs the question, “if it’s not hard then why don’t we?” Why do we not have a national framework where we track the developmental milestones and mental health and wellbeing of the 45,000 + children in care in Australia?

However, if you don’t track the ‘vital signs’ of those in care in real time, just as they track the vital signs of a patient in hospital our interventions will full short. Interventions should be individualised. It’s not rocket science… it’s neurological science!

Here is how you do it:

Why a national framework? So, we can compare apples with apples. So that we can look at big data and say, “look at this program in back of Bourke” it’s doing better than all the rest. What are they doing and how do we replicate it?”

Let’s make the health and wellbeing of children in care transparent. Evolution has failed us; we need revolutionary change.

About 2 or 3 years ago the upper house of parliament (the senate)  held an enquiry into Out-of-Home Care. I was invited to be a witness, which basically means I got to say what I thought about the sector. During my presentation I provided a document that included de-identified photographs of some residential houses. I wanted to show them what was the state of some of the houses that children and young people were living in.

The response from a number of the largest NGOs in this sector was to boycott Australian Childhood Trauma Group and the support services we provided. I was shocked, right at this time the Royal Commission into Institutional Responses to Sexual Abuse brought down one of its findings that basically said, “Institutions protected themselves before they protected children.”

That in lies the risk, when you speak out, there are those that will distracted by talking about hope and optimism. Hope and optimism will not improve the lot of children and young people in care.

Who will be the Greta Thunberg of Out of Home Care?

I am too old now to force this change, it will need the voices and the energy of young people with a lived experience in the sector. We need a Greta Thunberg, revolution not evolution.

During this conference I challenge you to ask the speakers, panel members and decision makers the question I asked at the beginning of this presentation, “Are children and young people leaving care today better off than 10, 20 30 or 40 years ago.” If they answer with subterfuge, then bring them back to the question.

When you go back to your communities, departments and agencies ask the decision makers, “Are children and young people leaving care today better off than 10, 20 30 or 40 years ago”, and insist on an answer if they say “yes”, ask them to show you the hard evidence.

Dream big and make it happen!

Finally, to the young people here today, we may not have done all that we could do to improve your life, however, I ask you not to give up. I want you to determine how your history forms a part of your life and not it dictating who you become.

To the workers and decision makers here today don’t settle for mediocre outcomes, be brave advocate and demand the resources you require to do the job so that children and young people will thrive and not just survive.