Skip to content
Trauma & Sensory Integration: The Egg & the Chicken

The consequences of trauma are many, for both adults and children. This interesting insight is from Odelya Gertel Kraybill Ph.D. into how trauma can affect children’s day-to-day functioning. 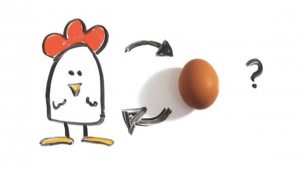 Few adults understand how trauma silently handicaps some children in day-to-day functioning that appears to have nothing to do with trauma. As an adult who struggled in childhood with the aftermath of trauma, I want to help others understand what might be going on with traumatized children and what you should know about it.

The consequences of trauma are many, for both adults and children. Recent articles, blogs and online discussions demonstrate rapidly growing awareness of this fact. This week, for example, a recent study by Elsey et al., (2015) reported an association between trauma exposure in early childhood and incidence of emotional disturbances and risky behavior later in life.

An area that has so far received little attention is the connection between trauma and sensory integration. In another post, I wrote about the impact of trauma in the pre-verbal stage on me. I inherited from this a chronic feeling that life is not safe. Every day, any moment, something terrible could happen.

“Hyper-alert” is a term often used to describe adults with post-trauma and PTSD symptoms. Children who were traumatized early enter life with a similar instinctive stance of being alert and fearful and it is, of course, the sensory systems that mediate their experience of the world.

Sensory Integration and the Seven Senses

Research in Sensory Integration (SI) has greatly expanded understanding of how the body, brain and emotions interact in processing sensory inputs. Ever found yourself yelling at people you love when you’re tired? Or unable to think in the presence of loud noise? Or annoyed by smells or sounds that others barely notice?

Those are your daily reminders of the interactive relationship of body, brain and emotions. An overload or stressor in one inevitably affects the other two.

The brain is processing sensory input all the time and our emotions are affected as well. The impact of noises, sounds and smell varies from person to person and changes across a day and across life.

Sometimes, we are over-sensitive and other times, we are under-responsive to sensory inputs and each of us has patterns unique to us.

Although people speak of “five senses,” there are actually seven data systems inputting to the brain: sense of touch, sense of sight, sense of hearing, sense of taste, sense of smell, sense of balance and sense of body position.

According to Kaiser et al., “sensory input is organized in a manner that enables an individual to establish a sense of where the body is in time and space, to feel safe in one’s own body and to accurately perceive the body’s relationship to the environment”.

Add the word “not” before a few of the verbs in Kaiser’s definition of sensory integration and you have an accurate description of how I felt in my body, in space and time, for as far back as I can remember, into my late twenties.

In other words, I have sensory integration issues.* Although research in Sensory Integration and trauma is pretty recent and small in data, my experiences as a trauma survivor and as a therapist have convinced me that understanding the overlap between these two greatly improves ability to respond usefully to trauma.

The Egg and the Chicken

Did I have sensory integration issues first, making me unusually vulnerable to trauma? Or did early trauma disrupt normal development of my mechanisms for sensory integration? I don’t know – I was too young to have narrative memories at that time.

For example, they have emotional reactions they did not have prior to trauma to certain sensory experiences of hearing, seeing, smelling or touching things.

It is not just a simple matter of “being reminded” of painful past events, though that can be a factor. It is that the whole system for processing sensory inputs is altered. Someone in trauma or deep grief may feel overwhelmed, physically weakened and defenseless, for example, in the presence of loud noise that has no apparent association with the traumatizing event.

For those working with trauma survivors, the key takeaway here is that working with survivors around sensory integration issues has great payoffs in reducing the impact of trauma. Skillful use of sensory integration techniques can both help mitigate the symptoms of trauma as well as assist survivors to develop sustainable regimes of life management that make them less vulnerable to re-stimulation on the long-term.

One pioneering trauma researcher, Dr. Bessel van der Kolk of the Trauma Center in Brookline, Massachusetts, says that “traumatic experiences initially are imprinted as sensations or feeling states, and are not collated and transcribed into personal narratives.”

In other words, traumatic experiences are primarily handled in the sensory processing networks of the body and lower brain functions, rather than the higher functions of narrative memory and rational thought.

Trauma survivors respond instinctively to reminders of traumatic events conveyed to them through sight, sound, smell, etc., with responses that are poorly or not all regulated by conscious awareness (van der Kolk et al., 1997).

We are only beginning to understand the resulting implications for treatment. One of the most important is that therapies that are restricted to higher brain functions – eg: talk therapies – have limited effectiveness with trauma survivors. Talking alone simply doesn’t engage the sensory systems that are most impacted by trauma.

This theory was born out in a pilot study in 2010 by Kaiser et al., which examined the possible benefits of psychotherapy if combined with sensory integration (SI) treatment as compared to psychotherapy alone in treating complex traumatic stress among adult who experienced childhood trauma.

Results indicated a significantly higher level of improvement for the group that received psychotherapy treatment and SI.

Odelya Gertel Kraybill, Ph.D has worked as a consultant, trauma specialist and expressive therapist for the UN and NGOs in the US, Europe, Middle East, Africa and Asia. She has recently relocated to Washington DC area where she uses an Expressive Trauma Integration approach to provide consultation, training, expressive supervision, therapy and e therapy.